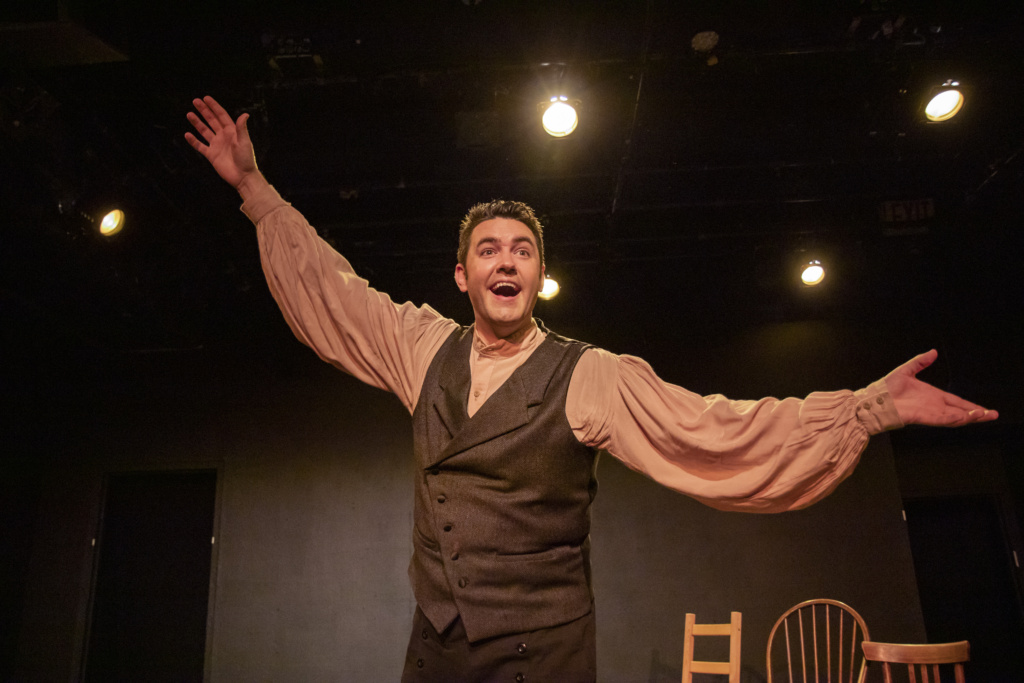 This preview article originally appeared in The Star & Wave newspaper on Wednesday, November 23, 2022.

One Christmas Carol You Won’t Want to Miss

When Charles Dickens sat down at his desk to write “A Christmas Carol,” his classic tale about second chances in 1843 London, I’m sure he never imagined that his book would inspire a play, much less one where a single actor plays 34 different characters.

Cape May Stage presents “One Christmas Carol,” a clever and engaging adaption of Dicken’s novella running November 16 through December 30 at its historic theater.

Most people are familiar with the story of the miserly, money-mad Ebenezer Scrooge, whose last name today is synonymous with greed and selfishness. Many recall Tiny Tim, his assistant’s crippled son who may not live another year; Fred, Scrooge’s ever-cheerful nephew whose invitations to family gatherings are repeatedly rebuffed with a “Bah, humbug;” and the ghostly Spirits who whisk Scrooge through his past, present and future to show him the error of his ways.

J. Max Baker returns to Cape May Stage to star as everyone in this fast-paced one-act, one-man show. Audiences may remember him from his starring role in the theater’s 2017 production of “Billy Bishop Goes to War,” for which he was nominated for “Best Actor in a Musical” by BroadwayWorld.

Baker delivers another award-worthy performance in this play.  It’s a challenging “role” physically and emotionally, but you wouldn’t know it watching him. Without missing a beat, he seamlessly slips from one character into another by changing his voice, accent, gestures and posture. One minute, he’s a young caroler singing outside Scrooge’s door. The next, he’s a portly do-gooder soliciting alms for the poor.

“Max Baker returns to Cape May Stage in triumph in the role he was born to play, or should I say ‘roles,’” said Roy Steinberg, producing artistic producer at the theater.

Baker actually grew up with the play. His father, Douglas Baker, a playwright and fellow actor, wrote the script for himself in 1995, when Max was only eight years old.  The younger Baker even named his dog Ebenezer.  He has since performed the show himself across the country and abroad.

The play unfolds on a sparse set comprised of three mismatched chairs, which Baker constantly moves as he sets the stage for characters to interact with one another. If three people are talking in a scene, for example, he plays each one from a different chair.

The show’s lighting and sound effects also enhance the storytelling. From flooding the stage with light when a spirit makes its entrance to turning locks as Scrooge tries to shut out his ghostly company, the play’s special effects add immeasurably to the narrative.

Baker’s appreciation of the play has grown over the years. “As a child, I thought the play was about a mean old man who loved money more than family, friends or experiences,” he explained. “As an adult, I know it’s much deeper than that. It’s about redemption and responsibility. It’s also a reminder to always root for the good in people.”

The timeliness of the play struck a chord with Steinberg. “For me, the message of the play is that we all have the opportunity to behave more kindly to one another,” he noted. “I can’t think of a moment in my lifetime that the need for kindness is more relevant.”

Interestingly, Dickens chose to read “A Christmas Carol” for his first public reading of any of his works in Birmingham, England in 1853. It was the same year that the former church that has been the home of Cape May Stage for the last 33 years was built.

“One Christmas Carol” runs Wednesday to Saturday at 7 p.m. with matinees on Saturday and Sunday at 2 p.m. For more information or to purchase tickets, visit www.capemaystage.org or call the box office at (609) 770-8311.